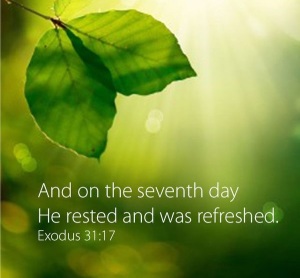 The Sabbath: How Do We Know Which Day It Is ?

article originally published in Signs of the Times,
September 22, 2015
written by: Ed Dickerson

I took a tour of Independence Hall in Philadelphia, USA, a while back, and my guide said that “the Declaration of Independence was signed in this room on July 4, 1776.” But he went on to explain that only one part of that statement was true. I love history, so standing merely a metre from where Thomas Jefferson had been seated in Independence Hall filled me with awe, and I thought perhaps I had misunderstood the man’s words. “It was not signed that day,” the guide said. “There was a war going on; they had more important things to deal with.”

On July 2 (and not the fourth), Congress unanimously approved the Declaration of Independence. But the vote was for a much altered document, with multiple passages crossed out, some words added and numerous corrections. It was definitely not suitable for framing or public display. The final draft was presented to Congress on July 4, which they then ratified as correct. On July 19, Congress ordered final “engrossed” copy, that is, one written in a large, clear hand. That’s the one on display at the National Archives, but this final copy wasn’t actually signed until August 2.

Discovering that the signing of the Declaration of Independence didn’t take place on July 4, 1776, got me thinking about dates, days and, being a pastor, the Sabbath.

The Sabbath is actually an integral part of what God made when He created the world. Genesis 2:2, 3 says that “by the seventh day God had finished the work he had been doing; so on the seventh day he rested from all his work. And God blessed the seventh day and made it holy, because on it he rested from all the work of creating that he had done.” Several thousand years later, God repeated this thought when He gave the Ten Commandments to the Israelites on Mount Sinai. He said that “in six days the Lord made the heavens and the earth, the sea, and all that is in them, but he rested on the seventh day. Therefore the Lord blessed the Sabbath day and made it holy” (Exodus 20:11). So both Genesis 2 and Exodus 20 tell us that God established the Sabbath at the time He created the world.

God obviously made the Sabbath for human beings, since animals don’t know the difference between the various days of the week. That’s why Jesus said that “the Sabbath was made for man” (Mark 2:27), for only humans have the intelligence to recognise that the Sabbath, as holy time, is different from the rest of the days of the week.

So here’s a question for you: If we could go back to last Saturday and the Saturday before that, and the Saturday before that all the way back to Creation, would we find that the Sabbath today is in sync with the Sabbath that God set aside when He created the world? Or could the weekly cycle have been changed during those millennia? If we could be mistaken about days and dates of less than 300 years ago, how can we be certain that we celebrate the Sabbath on the actual Sabbath day that God set aside at Creation? The problem we’re faced with is that there are absolutely no ancient chronological records in either the Bible or secular history to answer that question. However, there is a good answer.

The Sabbaths of history

Let’s start with the approximately 2500 years (according to biblical chronology) between Creation and God’s giving the Ten Commandments. Had the weekly cycle been changed during this time, God would have certainly corrected the problem when He gave the fourth commandment. But He didn’t. He told the Israelites to remember to keep the day they were already observing (Exodus 20:8).

But what about the 1500 years of Israelite history in Palestine—the time between the giving of the Ten Commandments and the New Testament era? Fortunately, there’s also a good answer to that question. If the Jewish people at Jesus’ time had been keeping the wrong day, Jesus surely would have corrected them. He had no difficulty clashing with the Jewish authorities over the Sabbath. Indeed, Mark 3 records a dramatic and deliberate challenge:

“Some of [the Jewish leaders] were looking for a reason to accuse Jesus, so they watched him closely to see if he would heal [a man with a shrivelled hand] on the Sabbath. Jesus said to the man with the shrivelled hand, ‘Stand up in front of everyone.”

“Then Jesus asked them, ‘Which is lawful on the Sabbath: to do good or to do evil, to save life or to kill?’ But they remained silent. “

“He looked around at them in anger and, deeply distressed at their stubborn hearts, said to the man, ‘Stretch out your hand.’ He stretched it out, and his hand was completely restored” (verses 2–5).

The Gospels record many times that the Jewish leaders challenged Jesus about the Sabbath, but they only questioned Him about the proper way to observe the day. Not one of them ever challenged Him over which day He observed the Sabbath. On the contrary. Luke tells us that on the Sabbath, Jesus “went into the synagogue, as was his custom.” So by His practice, Jesus reinforced the holiness of the seventh day—the same seventh day that had been observed from Creation to Sinai and from Sinai to His day.

And there’s yet another profound testimony that the Sabbath wasn’t changed between Creation and Jesus’ time. On the sixth day of Creation, “God saw all that he had made, and it was very good” (Genesis 1:31). Thus, the Sabbath began when God finished the first six days of Creation. The Bible records that “by the seventh day God had finished the work he had been doing; so on the seventh day he rested from all his work” (Genesis 2:2). At the end of Creation Week, God rested.

And Jesus repeated this pattern. We call the week before His crucifixion Passion Week, but I prefer to call it Redemption Week.

So we have a chain of evidence reaching back to Creation, confirming that the weekly cycle did not change in the 4000 years from Creatiom to the Cross. From Creation to Sinai we have God’s testimony on Sinai, and from Sinai to Jesus’ time we have His affirmation of the seventh day, both in His custom of going to the synagogue on the Sabbath and His resting on the seventh day in the tomb.

But there are still the two millennia between the time Jesus walked the earth and our day. Might the weekly cycle have been changed during those years? After all, we do know that there have been significant calendar changes during that time.

Gregory had a good reason for instituting the change. The problem was that the Julian calendar wasn’t quite synchronised to the orbit of the earth around the sun, so by 1580, the date for Easter was off by 10 days. This aroused the pope’s concern. Gregory’s correction only amounted to 0.002 per cent difference per year, but over the centuries after the Julian calendar was adopted, that tiny difference had accumulated. So to adjust the calendar, Gregory changed the dates of the calendar in October 1582. Thursday, October 4 was followed by Friday, October 15. The key point to notice is that the weekly cycle did not change. The change involved only dates, not days. Thursday was still followed by Friday.

However, many nations of Europe refused to adopt the Gregorian calendar for fear that it was a subtle plot to bring Protestants back into the Roman Catholic fold. The British Empire didn’t adopt the Gregorian calendar until 1752—nearly two centuries after Pope Gregory introduced it, and by then the difference between the two calendars had grown to 11 days. The British change took effect in September 1752, when Wednesday, September 2, was followed by Thursday, September 14. So again, the dates of September 3 to 13 did not exist, but it didn’t alter the weekly cycle.

Now think of this: For the past 2000 years, Orthodox Jews have been meticulous about their Sabbath observance. Had there been any change in the weekly cycle during that time, they would most certainly have made it known! But there is no evidence that they ever did. Therefore, we can be certain that those who observe the Sabbath on Saturday today are keeping the same Sabbath that Jesus kept.

In conclusion, we have a chain of evidence reaching back to Creation, confirming that the weekly cycle has not changed. From Creation to Sinai we have God’s testimony on Sinai. From Sinai to Christ we have Jesus’ affirmation of the seventh day, both in His custom of going to the synagogue on Sabbath and His resting on the seventh day in the tomb. And from Jesus’ day until now we have absolute evidence that the Sabbath Jesus kept is still the Sabbath today.

And this shouldn’t surprise us. If God cared enough about the Sabbath to sanctify it and make it holy, surely He has been able to protect its identity as well. Throughout all the centuries, the rise and fall of empires, the changes in human calendars, the Sabbath remains an unchanging memorial to Creation and Redemption—and to our loving Creator and Redeemer.

Source article:   https://www.hopechannel.com/read/sabbath-do-we-know-which-day-it-is
How and why was the day changed ?
http://toolong.com/sol-invictus-the-invincible-sun-god-by-richard-rives/

“In that day . . . will I sprinkle clean water upon you, and ye shall be clean, yea, from all your filthiness, and from all your idols, will I cleanse you . . .

Then the heathen (unbelieving) that are left round about you shall know . . . that I the LORD build the ruined places, and I the LORD plant that which was desolate . . . For I the LORD have spoken it, and I will do it !”